In part 1 of this series we defined neck pain and discussed the scope of the issue, including factors that influence the risk of experiencing neck pain. In today’s article we will cover the popular topic of posture as it relates to neck pain.

Posture is a way we hold our bodies while engaging with the environment. This includes the way we sit, stand, or the positions we assume to execute a movement or task. Our posture fluctuates throughout the day based on multiple factors such as our emotional state, fatigue, physical symptoms such as pain, the demands of the task we are trying to accomplish, and more.

Variability in our posture is important for our adaptability and ability to accomplish tasks. However, many choose to divide posture into “good” vs. “bad”, or “injurious” vs. safe. This dichotomous view of posture emerges from an outdated, reductionist way of thinking about structure, biomechanics, and pain. Lederman 2011 Korakakis 2019 These beliefs about postural perfection permeate our society and lead folks to seek out “optimal” posture, despite no evidence that such a thing actually exists. A recent study by Korakakis examined 87 young individuals without any pain or dysfunction and instructed them to adopt whatever they believed to be an “optimal” posture. After this instruction, subjects automatically shifted their habitual (preferred usual posture without influence) sitting posture to a more upright (extended) posture. Korakakis 2021 The authors state:

“Social contamination by common beliefs and stereotypes about posture, including that upright sitting is better than slouching, may partially explain these results, as postural behaviours likely reflect beliefs regarding ‘optimal’ [sitting posture]. Unfortunately, healthcare professionals also appear to often provide postural advice based on non-evidence-based opinions.”

Part of this “social contamination” includes the prevalent belief that bending the neck while using phones or mobile devices (termed “text neck”) is harmful to neck structures and leads to increased pain and disability. When examining the origins of this belief, the narrative appears to have evolved from a 2014 article by Hansraj. The article makes various claims about head position having detrimental effects on the cervical spine by increasing the mechanical loads distributed across the neck. Specifically, the authors claimed while the head is in a neutral position it weighs 10-12 pounds, but when bent forward, the load on the neck and upper spine increases (see figure 4). 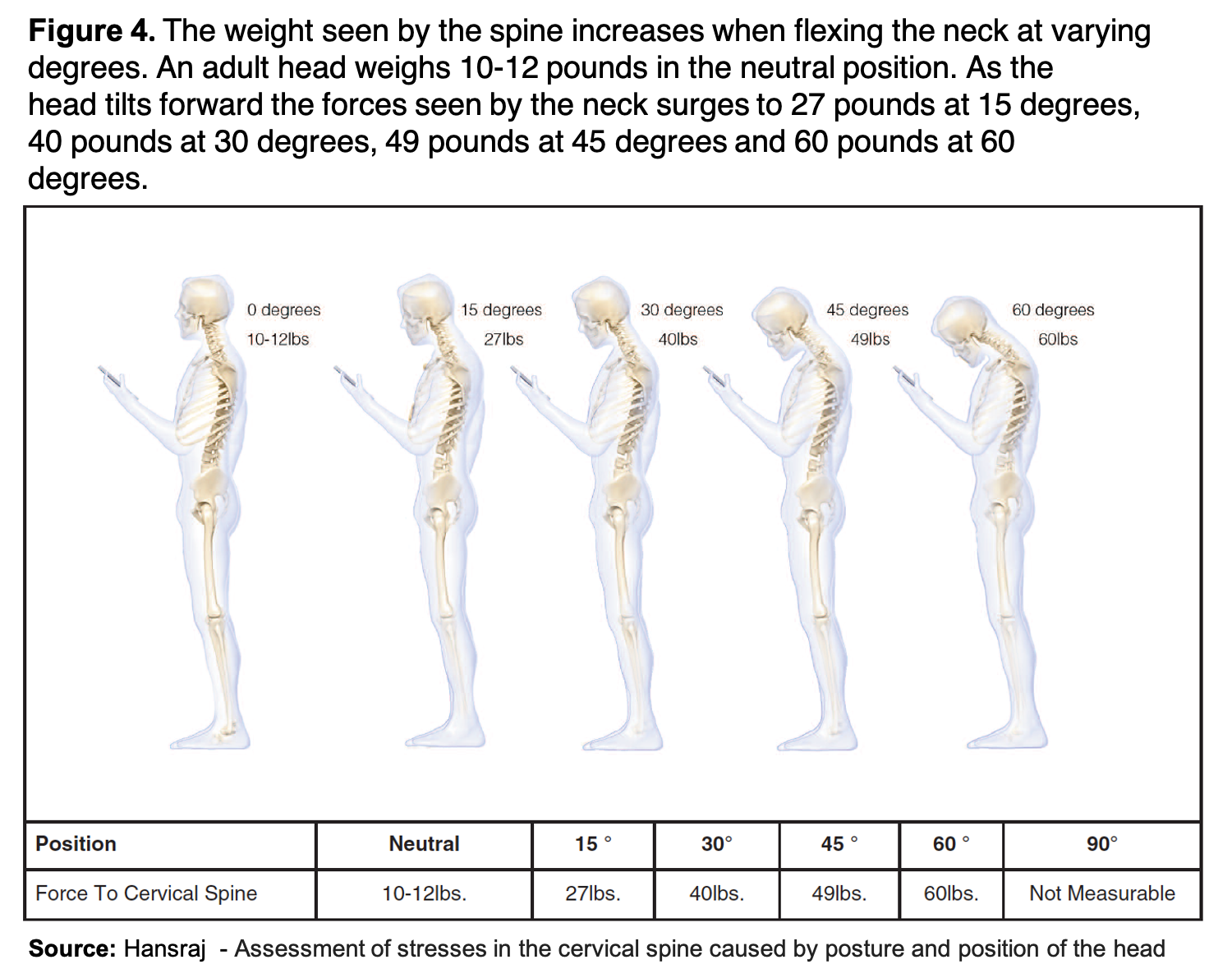 The assumption here is that humans are incapable of adapting to such loads, and that this leads to increased neck damage, degeneration, and pain. One article even asked if text neck is an “…epidemic of the modern era of cell phones?”, and then proceeded to make a series of claims of why the authors think this is the case. Cuéllar 2017 But there’s simply no good data to support these claims or to caution people against looking down at their phones.

A study by Correia sought to assess the validity of such claims related to “text neck” by examining head position and pain reporting in 582 participants. Interestingly, almost half of the participants reported occasionally worrying about their posture and a third during smartphone use. However, the authors were unable to find any relationship between neck flexion (e.g., looking down) while standing or seated and the prevalence, frequency, or intensity of neck pain. The authors then contradict the claims of the Hansraj et al article cited above:

“Our findings contradict the hypothesis raised by the aforementioned Hansraj study. At the average value found in the standing position (34 degrees vs. Hansraj 60 degrees), the simulated load would be much lower (around 40 lb or 18 kg, vs 60 lb or 27 kg). Besides that, data from mechanical load on the necks of cadavers showed a resistance of up to 540 pounds or 244.94 kg, nine times higher than mentioned by Hansraj.” Correia 2021

In other words, even if we wanted to focus exclusively on the biomechanical loads, it turns out our necks can handle substantially higher loads than what is incurred by looking down. Furthermore, living humans have the ability to adapt to resist such forces.

Another study of 238 medical students came to a similar conclusion; the authors found 50% of participants were affected by neck pain but no correlations were found between hours spent using a cell phone and posture during cell phone use with neck pain and disability. Bertozzi 2020 On the development of “degeneration” due to text neck, Meziat-Filho et al wrote:

Recall from part 1 of this article series that when we examine posture as a risk factor for pain or injury, we find a relationship with time spent in sustained positions, rather than any one particular position being inherently “good” or “bad”. Kim 2018 This suggests that we can sit and stand any way we choose based on comfort, tolerance, and necessity to accomplish a task.

A more recent study by Richards et al actually found the opposite of what most folks think regarding “bad posture” leading to pain. The authors conducted a prospective study examining whether neck posture presents a risk for developing persistent neck pain. The authors tracked adolescents from 17 to 22 years of age and assessed multiple variables including depression, activity levels, work physical demands, & subgroups of sitting posture. The authors assessed the presence of persistent neck pain at 17 years of age and re-checked at 22. Their overall findings:

“Two of the subgroups in this study were characterised by forward head posture. It has been previously hypothesised that biomechanical load created by the head being more forward of the centre of gravity may lead to a higher prevalence of [neck pain] in people with habitual forward head posture.

In contrast, our findings found there was no difference in the presence of neck pain between posture subgroups in men and that in women the lowest prevalence of [neck pain] was in the slumped thorax/forward head posture subgroup, while the subgroup with the highest prevalence of [neck pain] was the upright posture. This finding is also contrary to the beliefs held by health practitioners and in society that sitting up straight is optimal whilst forward head postures are not optimal and a cause of [neck pain].” [emphasis mine]  Richards 2021

These longer-term, prospective studies that follow subjects forward over time allow us to draw stronger conclusions compared to studies with cross-sectional (“snapshot in time”) or retrospective (looking backwards in time) designs. Based on the research presented here so far, we can likely increase our confidence in not stressing over having generalizable recommendations for neck posture in regards to development and persistence of neck pain. In other words, we should not be pontificating on the internet about how to “fix your shit” or addressing “incorrect” postures in order to avoid neck pain. This is good news, since it means we do not need to concern ourselves with maintaining ergonomically “perfect” positions and workplace habits with neutral head positions, retracted shoulders, and 90-degree bent elbows.

To be clear: we are not saying that a person won’t report symptoms with a particular posture or behavior, such as looking down. As we’ve previously discussed, in these scenarios it is more likely that the time spent in sustained positions is contributing to pain symptoms, not the positions themselves. This means you may find that you can look down while seated at your workstation for 30 minutes before noticing neck symptoms. Rather than worrying about “optimal” posture (which, again, does not exist in a generalizable way), simply take this as a cue to transition to the next tolerable position – which may be just looking up and positioning the screen in front of your eyes.

In summary: “text neck”is a made-up and unsupported concept that attempts to reduce neck pain to a purely biomechanical problem, and leads to unnecessary interventions to address pain symptoms. Slater et al. propose several advantageous beliefs about the topic of posture in their article, Sit Up Straight: Time to Re-evaluate:

To wrap up, “text” neck is not something to worry about. Although a person may experience pain with a particular posture, there is no reason to demonize or permanently avoid the position. Rather, think of this from the standpoint that having many options to transition to and from while working is likely advantageous for coping with pain that arises from sustained positions.

Hopefully this discussion has been helpful. If you’ve been dealing with neck pain and are unsure how to return to desired activities, we can help. Complete our intake paperwork for a consultation with our Pain and Rehab team HERE. In the next part of this article series, we will discuss how the healthcare system typically approaches neck pain, and how we manage the situation differently.

This article was edited by Austin Baraki, MD.

A Basic Guide to Cholesterol: Part I