It has been said that using Rate of Perceived Exertion (RPE) is useless for strength and conditioning, which has caused quite a stir between the Barbell Medicine crew and other coaching organizations because we had been using this tool with our clients to manage loading, training fatigue, and the intensity of conditioning efforts up until very recently.

New data has come to light that have forced us to reevaluate our stance on RPE and ultimately replace it with a novel method that we’ve been working- The Baraki Exertion Scale (Figure 1). 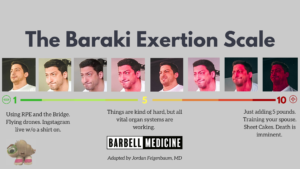 Figure 1: The Baraki Exertion Scale is visually represented by the degree of grimace, rubor, and proptosis exhibited by the lifter during the set being evaluated.

The Baraki Exertion Scale (BES) is a product of a retrospective analysis on the thousands of clients Barbell Medicine has coached over the years. We decided to share the abstract for the study performed in-house prior to publication.

Background: Many prominent strength coaches and athletes have rejected Rate of Perceived Exertion (RPE) as a valid tool for managing training parameters intra-workout due to it’s subjective nature and inter-lifter variability. Despite its success in a large number of sports at the highest level, a more objective, yet accessible, method of assessing effort during a lift is desired.

Definitions: Rate of Perceived Exertion=RPE/Useless, Rubor = Redness/Degree of Polycythemia, Proptosis=abnormal protrusion or displacement of an eye or eyes.

Methods: Client data from 2011-2017 was collected from Barbell Medicine (n=3011, average age 36.4 years, 2002 males, 1009 females). This data included videos submitted for form review, training logs, and electronic mail conversations between coaches and lifters. Two reviewers were used to pair the client-submitted video and relevant training log data. Training log data that was included in the review are sets, reps, RPE, and intensity. The reviewers matched the video submissions to the client data and determined the amount of , grimace, rubor, and degree of proptosis exhibited by each lifter for a given RPE and relative intensity. The interrater reliability (k) was found to be 99%.

Methods: RPE and relative intensity data were compared with grimace, rubor, and degree of proptosis separately on X-Y graphs to determine the strength of the linear relationship between the variables (R).  Correlation coefficients were compared to determine what difference in strength of correlation, if any, was present amongst the data reviewed.

Conclusions: In this retrospective analysis of a large, heterogenous data set we found that using the Baraki Exertion Scale represents a novel, objective determinant of exertion for resistance training applications. Given the perfectly linear relationship, we are forced to accept that RPE is useless for essentially everybody and should be immediately replaced with the BES without further study.

Acknowledgements: We have no conflicts of interest to declare. No animals, shells, Mike Tuschererererer’s, or feelings were harmed during this study.

Jordan Feigenbaum, owner of Barbell Medicine, has an academic background including a Bachelor of Science in Biology, Master of Science in Anatomy and Physiology, and Doctor of Medicine. Jordan also holds accreditations from many professional training organizations including the American College of Sports Medicine, National Strength and Conditioning Association, USA Weightlifting, CrossFit, and is a former Starting Strength coach and staff member. He’s been coaching folks from all over the world  for over a decade through Barbell Medicine. As a competitive powerlifter, Jordan has competition best lifts of a 640lb squat, 430lb bench press, 275lb overhead press, and 725lb deadlift as a 198lb raw lifter.

A Basic Guide to Sleep Apnea